Jim Carrey ditches the goofy faces and plays it straight in this psychological, romance story. There are very few films I cherish more than Eternal Sunshine of the Spotless Mind. Years on and it’s still one of the best films I’ve seen and in my top five of all time.

It imagines a world where removing large portions of your memory is possible. It’s a complex story about the uncertainty of personal identity, reality and love. It follows reclusive Joel (Carrey), who begins a relationship with free-spirited Clementine (Kate Winslet). When their romance starts to crumble suddenly, Clementine has her memories of Joel completely wiped.

Joel is a broken man when he realises his long-term girlfriend doesn’t even recognise him. So, he decides to do the same thing but immediately regrets his decision. This leads to a mind-bending venture through Joel’s mind, as he fights for the memories of Clementine.

Oscar-nominated screenwriter Charlie Kaufman wrote the script. How he comes up with such unique ideas is a mystery. He made his name from writing the script of Being John Malkovich (1999), directed by Spike Jonze. It has the same quirky tone and intrigue of Eternal Sunshine. Kaufman’s work requires a certain taste and while Eternal Sunshine isn’t for everyone, I say it gets better with repeated viewings.

Firstly, it is a tad confusing as most of the film takes place inside Joel’s head. Also, it has an unconventional nonlinear narrative, which offers multiple interpretations. One of the things you will learn from Eternal Sunshine is that Jim Carrey actually can act. His performance is way better than any of his comedies.

Some viewers may find it difficult to take Carrey seriously, as he is so entrenched in his comedic roots. But not only has he diverged from comedy but into a film with elements of sci-fi fantasy. I mean, this is a film where special doctors orchestrate memory removal procedures. The Lacuna Inc organisation acts in response to people who want to completely forget about their partners after a break-up.

At the start, it’s quite slow but there’s always a sense of mystery, which keeps you watching. The stagnant build-up at the beginning is in tune with Joel’s dull and isolated lifestyle. It’s only after Joel meets the energetic and impulsive Clementine that the film starts to pick up speed. It really gets underway when Joel battles to save his memories and the scenes inside Joel’s head are riveting stuff.

The film is visually excellent as Gondry navigates through Joel’s repressed traumas. The Journey within Joel’s sub-conscious plays out like a psychological thriller. Eternal Sunshine is a mash-up of genres, which is why it’s so ambitious and original.

Also, the people working at Lacuna Inc are important to the story. This includes Howard Mierzwiak (Tom Wilkinson), Stan Fink (Mark Ruffalo) and Kirsten Dunst’s character Mary Svevo. The supporting cast all get their moments in the spotlight, as well as a surprise appearance from Elijah Wood. The characters are fantastic and Kate Winslet as Clementine is one of my favourite characters from any film. She is such a well-developed, detailed and an utterly lovable character.

I am yet to see a film that captures relationships so authentically and engagingly as Eternal Sunshine. It has an undertone that’s both poignant and uplifting. With a mixture of happiness and sadness, it hits every single beat.

It also projects thought-provoking messages about the meaning of life and questions about whether we are in control of own destiny. Most importantly, it stresses the importance of holding onto to our most sacred memories. There’s no question the film is challenging, but you won’t have seen anything like it. The story and the concept are ingenious. 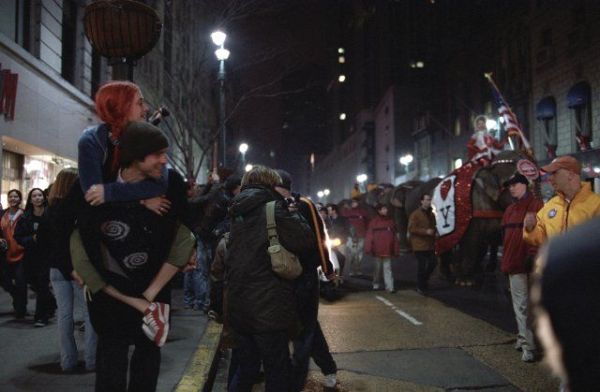 This is an essential watch. If you like all things quirky and unconventional, you’ll love the film as much as I do. The level of detail in the story is something you won’t find in many commercial films. Eternal Sunshine of the Spotless Mind is one of the greats.

(I wouldn’t recommend watching this trailer – it’s a very poor representation of the film!)

Quoted: “How happy is the blameless vessel’s lot, the world forgetting but the world forgot, eternal sunshine of the spotless mind…”

Have you seen Eternal Sunshine of the Spotless Mind? Let me know your thoughts in the comment section!

5 thoughts on “Eternal Sunshine of The Spotless Mind (2004)”