As much as I enjoy a good action flick with a badass hero, the films that have the most effect on me are the ones about ordinary people. Let’s face it, regular folk who must rise to the occasion allows for way more food for thought. I have lost count of the number of indie dramas I’ve seen, but Winter’s Bone is a good one. It’s a film that’ll satisfy all the die-hard cinema fans.

A journey through an amoral world

The story is simple. Seventeen-year-old Ree (Jennifer Lawrence) is raising her younger brother and sister, as her mother is mentally ill. While doing so, she sets out to find her meth-dealing father who’s gone missing. Sounds like a bit of shambles, doesn’t it? But what’s worse is that she must track him down before his court date, as he is out on bail following an arrest. His house is part of a bond agreement and failing to show up to court means Ree and her family will face eviction. So to keep a roof over their head, she must find her wayward father.

Set in a poverty-stricken, remote area in America’s Ozarks, Winter’s Bone is a tough and gripping drama. It details the lives of people we don’t often see in movies. Straight away, we’re shown the hardships of the people that live in this community. Everyone is bound by secrecy and loyalty. This makes things extra hard for Bree, as she journeys through the backwoods, from house to house, determined to solve the mystery of her father’s disappearance.

On her search, every person Ree meets is intent on keeping any information about her dad quiet. Shady, dodgy and untrustworthy is an appropriate summary for the majority of people she runs into. There is the threat of violence if she continues to pester the people. The most dangerous person she encounters is her own uncle, who is known as Teardrop (Hawkes). I couldn’t take the name seriously at first but it’s sort of appropriate. He’s an intimidating dude and is involved in drugs, so he’s not someone you mess with. But as the story progresses, his motivations become unclear and you can’t tell if he wants to help Ree or if he has darker intentions for her.

What makes Winter’s Bone so effective is that it’s set in the open country. This is unfamiliar terrain for a lot of viewers so the film wouldn’t have been as eerie if it was set in a recognisable city or town. Director Debra Granik has done a great job of capturing a bleak, quiet landscape where no one is to be trusted. It’s easy for a story like this to be caged in misery, but Ree’s hope and determination keep our spirits high. 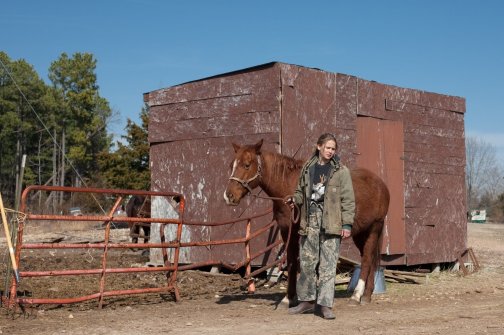 The film is never tough to watch, despite its dark tone. There’s one scene that might leave some viewers a little shaken. Other than that, the film is an eerie mystery story that keeps you guessing. How did Ree get to be the way she is? Is her dad dead or alive? These are the questions that’ll be running through your head.

Winter’s Bone is a focused, unhurried piece of filmmaking that isn’t overly ambitious. It’s not so much about overcoming massive obstacles than it is about surviving them, and Bree is quietly heroic. We’re shown a society the world has neglected, in which damaged characters must keep going in difficult circumstances.

Directed and written by: Debra Granik