Patrick Bateman (Christian Bale) is the kind of guy that would ridicule anyone who went to see a psychiatrist. Meaning, he would never go to see one himself. Well, he really needs to since he spends his spare time killing people for fun. (Or does he?)

I’ve seen American Psycho a couple of times now, so you’re reading my retrospective thoughts. I’ll start off by saying that the first thing that strikes you is the dark, off-beat humour. It’s satirical in tone, ripping Wall Street to shreds with its depiction of New York yuppies, as Bateman takes us into his corporate world.

Here, everyone has the same personality. They’re shallow, condescending, selfish and sneering. Batemen fits right into that crowd, but he hides a psychotic ego from his co-workers. In his off-hours, he delves into his violent fantasies. Part of the movie’s dark brilliance stems from the fact that Bateman is only unique because he’s a psycho. If you look at the other characters like Paul Allen (Jared Leto) and Luis Carrithers (Matt Ross); nothing separates these men.

Bateman does a lot of despicable things and that’s only half his character. The other half satirically epitomises the Wall Street mentality of the 1980s. Scenes, where he eats at expensive places or compares business cards with his colleagues, are examples of the satire. There are some hilarious moments, featuring men showing off their wealth, rivalling one another through their salaries, branded watches and clothes.

One of the running jokes is that characters constantly get each other’s names wrong and mistake people for each other. This is because they all mimic one another. They’re so wrapped up in their own personal lives, they couldn’t care less about remembering people’s names. The scariest thing about Bateman is that he’s just another faceless member of society, despite being completely insane.

American Psycho has very difficult material that is often misunderstood. It is open to interpretation, but the one thing that it’s not is a slasher film. Proper slasher films are scary, have a sense of threat and the killer’s identity is always revealed at the end. That’s why I don’t consider American Psycho an out and out slasher film. It has “slasher” elements, but it’s a bitter social commentary more than anything else. The only issue I have is that it never offers a solution to the problems and is instead reliant on shock horror. However, it keeps the balance between a chilling thriller and a dark comedy.

As for the style, it’s slick and transgressive, with a voiceover from Bale that brings you into Bateman’s head. We see the world through his eyes. It gives the viewer the feeling that they themselves have committed the killings. It makes you fear the threat of being caught, and Bale is entirely convincing as a man who pretends to be normal to cover up his crimes.

From where I’m standing, Patrick Bateman is the best character Bale has ever played. He’s not a pleasant character by any means, but he’s unforgettable. His false pretences and crazy behaviour will leave you crackling in your seat, or with the troubling idea that he represents a total lack of identity. As Bateman himself puts it, “There is no real me: only an entity, something illusionary … I simply am not there.” 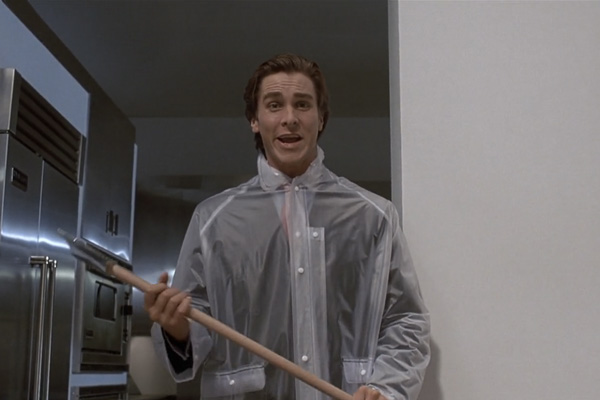 Like all great films, it doesn’t feel redundant to talk about American Psycho even though it came out many years ago. I give credit to the director Mary Harron for driving home the themes so well while adding a splash of ambiguity. It’s a must watch for the cut-throat messages that are still relevant today.