You’d be forgiven for thinking Three Billboards Outside Ebbing, Missouri was going to be straightforward. It seems like a simple revenge tale. But it’s not. It’s more a tale of how life can hurt, heal and transform people in the strangest ways. Right from the off, it completely denies you the comfort of an easy viewing. If you think it’s crossed the line, that’s part of the point.

The punchlines bite at you with no remorse, the characters spit out jibes left right and centre, and a clear moral footing doesn’t exist. My goodness… what a brutal, profane but very, very funny film.

The setup sees Mildred Hayes (Frances McDormand) seeking justice for her daughter’s murder. She’s a grieving mother on a warpath in her small-town. Despite the efforts of Chief Bill Willoughby (Woody Harrelson), the killer is no closer to being found. Mildred’s had enough of the lack of progress in the investigation, so she takes matters into her own hands. She decides to rent three billboards to put pressure on Cheif Willoughby. Mildred becomes locked in a battle with the police, and it’s on the verge of pushing her over the edge.

McDormand is right where she belongs in this black comedy, commanding attention in every scene. Her most memorable character has always been Marge from Fargo, but now I’m thinking Mildred Hayes takes the crown. She’s straight-up brilliant as a misguided hero, with flaws and grey areas. You root for Mildred, even if you don’t agree with her behaviour.

I love a strong female protagonist, so for me, it was easy to warm to her character. Also in the mix is racist, local cop Jason Dixon (Sam Rockwell), who’s arc runs alongside Mildred’s. He’s a despicable man, but a relevant character because you know there are hundreds of people out there with Jason’s worldview. 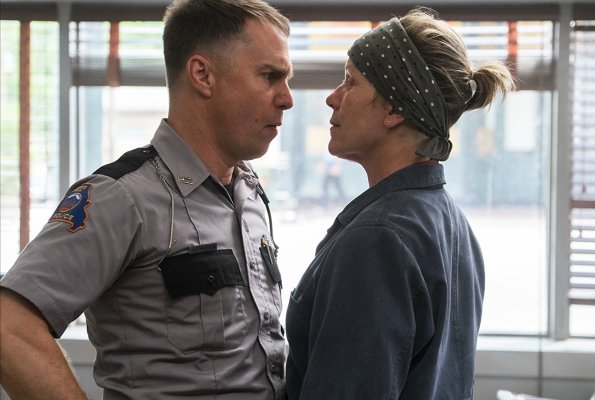 While the film does boil down to the fates of the three characters mentioned, the paths they take are open-ended. Nothing is ever clear-cut and there are more questions than answers, and Ebbing adds to the uncertainty because it’s almost like a ghost town.

You get a real sense of a damaged community on screen. Since the setting is not a real place, Martin McDonagh has the freedom to take his characters in any number of directions. This is not a “realist” film, as every character is deliberately over the top. We see these characters from different angles, as they’re all stuck in a cycle of grief and anger. What’s great about this film is there’s no good guy/bad guy division. Instead, we get a more dead-pan look at ’70s America, with razor-sharp irony.

Until its final moments, Three Billboards Outside Ebbing, Missouri is a beast of a movie. Even when things take an emotional turn, it avoids dipping into melodrama. Also, there’s something refreshing about the way it highlights that there are often no consequences for horrible things in life, such as racism and abuse of power. This is an important aspect of the film, but after all, it is a comedy and there are lots of laughs to be had. I’m not easily offended so I had no problem with any of the jokes.

Besides a couple of scenes that jump around like they’re on speed, I can’t find any clear flaws. It’s an outrageous film that challenges your stance as an audience member. Three Billboards remains a memorable, darkly comic movie. Not something we’ve seen before. 5 out of 5.

Written and directed by: Martin McDonough