Inherent Vice has a rambled plot which is secondary to characters, incidents and drug-fueled comedy. How do I even begin to review a movie that’s so chaotic? It’s a detective tale and it’s completely riveting in its manic storytelling. It has a one-of-kind style and it’s all about mood and vibe. This is a big part of what makes it distinctive.

Doc Sportello (Joaquin Pheonix) is a stoner hippie and private investigator in the 1970s. He’s a lovable, scraggly man-child and looks like he belongs in The Big Lebowski. Doc’s problems begin when his ex-girlfriend, Shasta (Katherine Waterston) visits him at his beach house. She asks Doc to find her missing lover, Micky. As Doc digs for clues, things quickly spiral out of control into dozens of sub-plots, involving corrupt police, heroin smugglers and a strange organisation named The Golden Fang.

Oh, wait there’s more. I didn’t mention the tax-dodging dentists, the Nazi biker gang, a band, a rehab clinic and a real estate dealership. You might feel like you need to get out a pen and paper to keep track, but here’s the thing – the less you try to figure out what’s going on, the better. 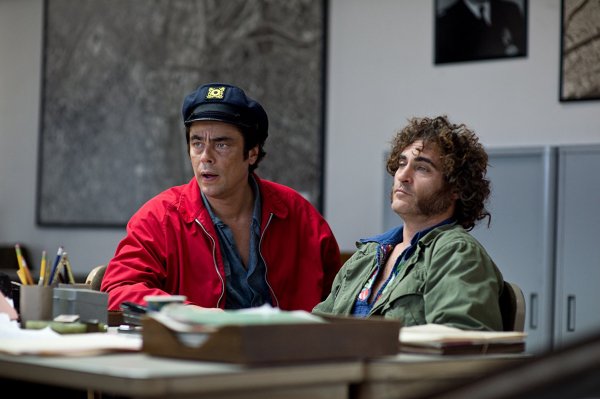 The viewer isn’t given clear information, so it’s not worth stressing over. It’s one large, ever-evolving mystery with loose ends and no visible results. I found it easy to accept this movie has been made for an “experience”, rather than to tell a meaningful story. It’s playful and eccentric with bursts of hilarious comedy. The characters speak with zippy dialogue and they feel like real people, despite the brightly coloured, exaggerated world they live in.

Doc stumbles through the mystery dazed and we’re never sure if he’s even a good detective, but he knows he’s fighting a lost cause as he gets deeper down the rabbit hole with no end-game in sight.

Inherent Vice is such a strange beast. It won’t work for a lot of people because the plot is all over the place. But when you let it wash over you, the film is fun and exciting. It transports you to another time and place, and it’s a mastery execution of escapism. It’s like you’re staring at a reflection of the 1970s, wrapped up in absurd comedy and crime. Inherent Vice has heart and soul, too, but it’s more style over substance. The complexity of the plot highlights a greater evil hiding beneath the surface. Doc’s just doing the best he can under the circumstances, which is all anyone can hope to do.