Race is the true story of Jesse Owens, one of the greatest athletes in track and field history. He smashed records and won four gold medals: 100 meters, 200 meters, long jump and 4 x 100-meter relay. Quite simply, Owens is a sporting legend. This film is a fine account of Owens’ life and achievements, as well as an interesting look at the racism that almost ruined his path to glory.

The story of Race is a significant one and I’m surprised it hasn’t been told before because there are so many different ways to tackle the subject matter. We follow Jesse Owens (Stephen James) as he competes at the 1936 Berlin Olympics, amid raging Nazis and many racist Americans. Nevertheless, Owens surges forward in pursuit of those shiny gold medals. Race is on one level a Chariots of Fire style-tale about an underdog beating the odds. On the other hand, it’s a serious drama about race, politics and social attitudes.

The film makes sure we know about the racism Owens encountered, and that the racial slurs people hurled at him were constant. There’s no soft-pedalling the racism, but it’s not all doom and gloom as the focus is on how Owens overcomes these problems. At its best, this is a defiant, positive and uplifting film that pays tribute to black athletes. 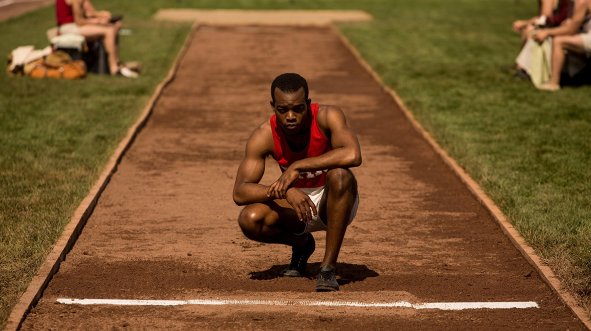 While there’s some good material here, it could have done with a lot more intensity. For a film about a sprinter, it doesn’t have much pace. It feels as if the filmmakers assumed everyone knew the story, so they skipped on creating any sense of uncertainty or anticipation. That’s not to say the athletics scenes are bad per say, but Owens wins, wins – and then he wins again. It’s not something that will test your patience, but you do get the point fairly quickly.

Race is the kind of film where you can sit back and enjoy the story in a grand theatre sort of way. Owens’ personal struggles and the interesting sub-plots make the film worth a watch. As a biopic, it’s a strong effort. It could have been speedier getting us to the finish line, but Race is a dramatic, entertaining film that does a great job of showing us everything Jesse Owens stood for.