Deadpool – a gleeful, self-referential character bathed in satire, gets his first taste of the big screen. Well, sort of. Deadpool technically made his first appearance in the very forgettable, X-Men: Origins. But the film messed up the character so bad, that I’m literally not counting that version as Deadpool.

I’m happy to report that director Tim Miller, puts the real Deadpool front and centre, with Ryan Reynolds giving the character another crack. This time, his portrayal is spot on. He perfectly captures Deadpool’s cock-and-balls attitude and his awareness of his fictional status, breathing new life into the superhero genre. Over the past few years, there’s been a splurge of superhero films, but the foul-mouthed Deadpool has given the genre a much-needed shake-up.

Deadpool is a satirical deconstruction of the comic book genre, and for anyone who doesn’t know, it’s set in the same universe as X-Men. With its unhinged, raunchy humour, Deadpool delivers gag-after-gag, frequently breaking the fourth wall, and it doesn’t hold back when it comes to violence, so it’s not for the faint of heart.

Beyond the irreverent comedy, however, the film has quite an endearing plotline. It’s the story of Wade Wilson, a former special forces operative, living in New York. Life isn’t too bad for Wade when we first meet him. He’s got a new girlfriend Vannessa (Morena Baccarin), and they seem like a perfect match. But Wade’s world comes crashing down when he finds out he has cancer that has spread to various parts of his body. Taking drastic measures to cure his cancer, he agrees to undergo an experiment with a shady organisation, who say the procedure will give him mutant-like superpowers. 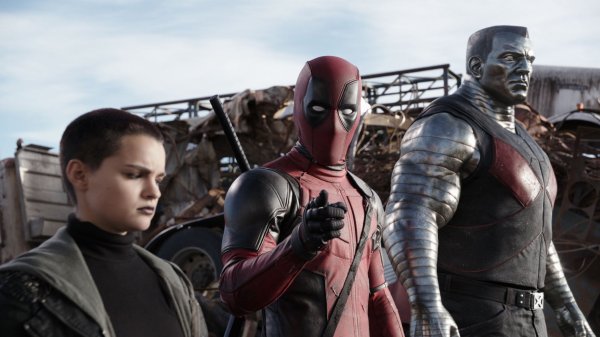 It’s not long before Wade realises he’s made a grave mistake, as he faces torture and disfigurement at the hands of the twisted Ajax (Ed Skrein), but he’s blessed with newfound fighting and regenerative powers. When Ajax leaves him for dead, Wade spends the next year training to hunt him down and kill him. Vengeance on his mind, Wade becomes a masked vigilante, adopting the name “Deadpool”.

Two X-Men Colossus (a motion-captured performance by Stefan Kapicic) and Negasonic Teenage Warhead (Brianna Hildebrand), fight alongside Deadpool, both of who try to keep the peace between mutants and humanity. Deadpool is a highly entertaining flick, proving that you can make a successful R-rated superhero film with the right material. It’s very funny, purposely shallow with jokes that are actually clever. The film regularly comments on its own existence and jokes about the movie industry, and this reality-bending humour is perfectly pitched, never feeling forced.

In terms of performances, Ryan Reynolds steals the show. He immerses himself into the Deadpool character. Skrein as Ajax makes for an excellent villain. He’s cold, calculating and dangerous. In other words, he’s easy to hate. Colossus is a fun interpretation of the X-Men character, but he mostly operates in the side-kick territory. Deadpool always feels like it’s pushing back against the expectations of the superhero genre, yet the structure of the film is very straight forward. It’s not the greatest or the most interesting piece of satire you’ll ever see, but it’s definitely one of the most outrageous.

Deadpool is the most faithful comic-book adaptation in years. It’s essential viewing for superhero fans, but I also recommend it to those who don’t normally like superhero films. Deadpool is hugely enjoyable, action-packed and straight to the point. I look forward to the sequel.