From boy wizard to skinhead, Daniel Radcliffe finds himself in an unlikely role in Imperium, portraying FBI agent, Nate Foster. After interrogating a terrorist suspect, Nate’s superior, Agent Zamparo (Toni Collette), turns her attention to white supremacist groups, who she believes is the real threat. 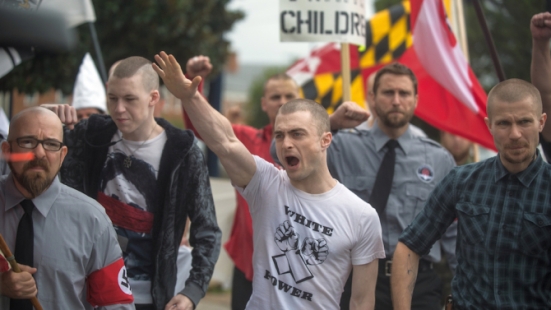 Convinced that the extremist radio-host, Dallas Wolf (Tracy Letts) has inside knowledge of the white nationalists’ plans, she assigns Nate with an undercover mission. Shaving his head and immersing himself in the white nationalist culture, Nate poses as an Ex-Marine who has just returned from Iraq. Within the extremist group, he searches for information regarding a possible terrorist attack.

Imperium is inspired by the experiences of former FBI agent Michael German, who spent over a year as an undercover Neo-Nazi. He also helped write the script with the film’s director, Daniel Ragussis. Unlike racially-charged films such as American History X (1998), which is very much concerned with the psychology and humanisation of right-wing extremists, Imperium is very straightforward. It never deviates from its focus of being a film about infiltration and Nate’s plunge into a racist culture, whilst maintaining his own principles, skillfully sticking to his objective and most importantly, keeping his cover.

Nate gets involved with a group of thuggish skinheads, who have some violent and aggressive agendas. They are led by the militaristic, Andrew (Chris Sullivan). These skinheads are about as stereotypical as it gets, as their presentation is exactly how you would imagine the archetypal right-wing extremist. Interestingly, there is a contrast between them and the well-mannered and articulate, Gerry (Sam Trammell), who is alarmingly likeable despite his beliefs.

In all honesty, I was expecting Radcliffe’s character to start neglecting his own principles and in a turn of events, he would begin to agree with some of the racists’ views, as he spends so much time with them. However, even though it would have been way more interesting if Nate had some sort of identity crisis, it is ultimately not what the film is concerned with.

Daniel Radcliffe does really deserve credit for establishing himself as a versatile and serious actor. These days I forget he spent ten years of his life playing ‘The Boy Who Lived’. However, unfortunately, Daniel Radcliffe is an unconvincing FBI agent. It is difficult to really believe in his portrayal as an undercover agent, which is the main thing that holds this film back.

Although he is supposed to be playing an inexperienced agent, Radcliffe’s screen presence and stature just don’t convey his role as a secret agent well enough. It is a particularly unusual casting choice, but he still provides a grounded and intelligent performance. Also, the film’s investment in character development is shoddy, to say the least, and it isn’t helped by the various montages of propaganda images which do nothing but stall the film.

For a film about racism and extremist groups, Imperium is nowhere near as challenging as it needs to be. Certain moments in the film are genuinely unsettling, but I believe the film does not get its message across as effectively as it could have. When compared to This Is England (2006) and American History X (1998), the film lacks significant quality and impact.

Imperium is a decent film if you are interested in race-related issues. Whilst it has a focused and compact story-line, I believe the film needed something extra to make it really stand-out.

Quoted: “A man’s body dies, but his deeds live forever.”