One of the many things I have great respect for is people who tell it like it is. This is precisely what Ken Loach does with I, Daniel Blake. It’s a film that left me with a knot in my stomach, as it dawned on me that Loach’s portrayal of a poverty-stricken Britain couldn’t be closer to reality. It’s tough to watch, but a vital film.

Daniel Blake (Johns) is a good man, an honourable citizen living in Newcastle with forty years worth of work under his belt. But he’s fallen by the wayside like so many others and has found himself trapped in the flawed benefit system. His ill health means he can’t apply for a job or claim job seekers’ allowance. He’s stuck in a nightmare that looks inescapable, and when faced with endless forms and CV courses, it becomes clear to him that the welfare system is designed not to work.

Ken Loach isn’t putting his middle finger up at the Tory party, but he is biting back at the state, showing Britain as it is in the present moment. It’s always easy to say that people ‘on the dole’ have no intention of looking for a job, but here Daniel wants to work. He even does things the old-fashioned way by searching for employment on foot. I don’t know about you, but I can’t remember the last time I marched the streets hunting for jobs in such a succinct manner. It’s an eye-opener to have this kind of thing portrayed on-screen.

However, the film isn’t just Daniel Blake’s story, as arguably young mum Katie (Squires) is the most insightful character. Her experiences raising two kids with little money are intertwined with the struggles of Dan. The film is full of unknown actors and Hayley Squires is a real revelation, providing a raw, gripping performance that she deserves serious recognition for. Every pain, frustration and anguish these people endure, we feel it with them.

I do think Loach presents Dan as a bit too virtuous and saintly because you start to wonder why no one will give this man a job, someone with such a big heart and who has so much passion. This is my only issue with the film, although I am nit-picking here slightly. But the message is that ultimately even good, decent people can fall victim to the problematic benefit system. 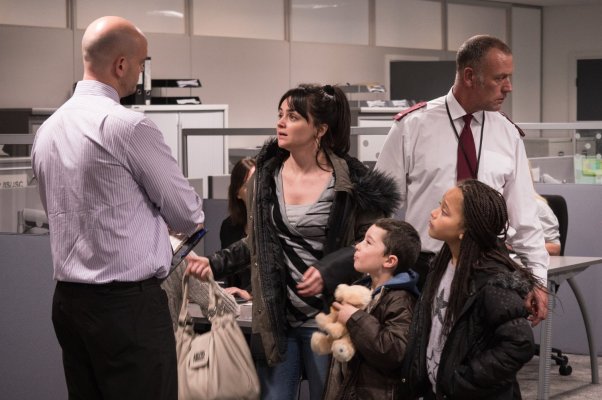 I, Daniel Blake is a blast of social realist brilliance. I know I’ve made it sound quite depressing, but believe it or not, there are parts that make you laugh. It’s a film of passion and fire, and I strongly urge everyone to see it. I have never seen such a realistic portrayal of our contemporary landscape, and I’m genuinely so glad Ken Loach made this film. It’s a story of the everyman, the every-woman, and delivers a message that is so important to us all.

Quoted: “A cursor? Well that’s a bloody apt name for it, aye?

Let me know what you thought of I, Daniel Blake in the comment section!