A wrestling movie that’s not really about wrestling… Streaming now on Netflix, this is an excellent drama, directed by Darren Aronofsky.

Randy ‘The Ram’ Robinson (Mickey Rourke) is a pro wrestler, who’s way past his prime. He was a star in the ’80s, but now he’s small-time, only featuring in a handful of matches. He also works part-time in a supermarket. Anything to help pay the rent. Life seems to have past Randy by, as he doesn’t have much to show for himself anymore. No wife, a faded career and a daughter he barely sees. Nothing but regret and missed opportunities.

Randy could have any other job and he’d still be the same lonely guy. That’s what I think is so good about The Wrestler, because first and foremost, it’s a character study. Everyone knows wrestling is fake: there’s no actual competitive drive. From the stunts, rivalries and wrestling moves, it’s all staged for entertainment.

The wrestling is a backdrop for Randy, as he tries to get his life together and make amends with his estranged daughter, Stephanie (Evan Rachel Wood). He’s on a constant search for a deeper meaning in his life outside of the ring, as he knows he’ll eventually have to retire, especially since his health is on the decline.

I loved the way Aronofsky treads carefully and takes the sport seriously, portraying it with realism. We see the ‘fake’ issue dealt with, but the drama and characters are put firmly in the driving seat. Marisa Tomei plays supporting character, Cassidy, and she develops a close bond with Randy. As an ageing stripper, she’s also wary of her career coming to an end. Her story serves as a parallel to Randy’s. So, the film shows us two maligned professions in detail.

I can’t think of another actor who could have played Randy with the same level of energy and grit, that Rourke brings to the role. Nicolas Cage was originally in the running to play Randy. I cringe to think what this film would have been like with Cage playing the lead. I just can’t see the character working with any other actor. Rourke doesn’t just play the part, he IS Randy ‘The Ram’. He has that ‘acting without looking like you’re acting’ down to a tee. Better yet, Randy is really damn likeable. The same goes for the rest of the cast. Every performance is on point. 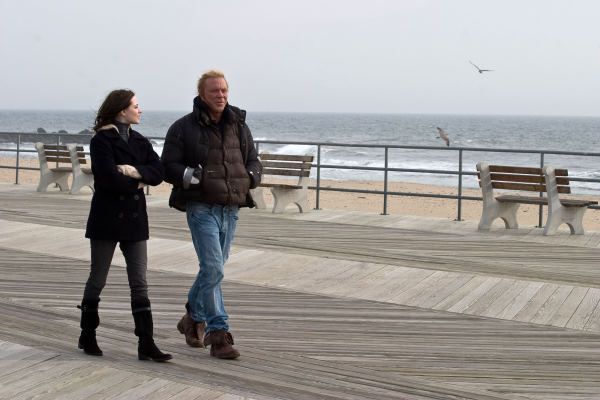 The wrestling scenes are amazingly choreographed. Rourke sure looks the part when he’s in the ring, helped by the fact he did his own stunts and gained a tonne of muscle for the role. The fight scenes are frantic and bloodied, but far less dramatic and visually appealing than those in the Rocky films. When compared to other fight films, The Wrestler looks like it’s on the cheap end, but it captures Randy’s negative mindset and his fall from grace.

The Wrestler is above all, a redemption movie, so the plot isn’t overly original. But it’s not predictable at all and has a superb ending. This is a very different Darren Aronofsky film. It’s stripped down and more conventional than much of his other work.

The Wrestler is an effective portrait of a faded star, who’s going through the motions. Perfectly cast with an engaging story, this is a great film. And you don’t have to be a wrestling fan to enjoy it.