Guns, gangs and free-for-all action in a Reservoir Dogs style setting: this is a bloodthirsty action-comedy. Just the way I like it. Set in 1970s Boston, Ben Wheatley’s Free Fire is about a gun deal gone horribly wrong. Irish mobsters, Chris (Cillian Murphy) and Frank (Michael Smiley) lead their pack of goons to an abandoned warehouse, to buy guns from arms dealer, Vernon (Sharlto Copley) and his associates.

Very quickly, Chris realises that Vernon has supplied the wrong weapons. As a result, frustration and tension arise between the two groups. This is amateur behaviour. The deal was supposed to be smooth, efficient and problem-less. On top of that, two opposing members recognise each other from something that happened the previous day. Now there’s real trouble.

Twenty minutes later, bullets start flying and absolute chaos unfolds. It’s all very funny, a bit silly and not particularity well-structured, but the action has so much zest you can’t stop watching. Everyone takes up arms to cover their own back and soon they’re all scurrying around, nursing several wounds. Every single character gets shot multiple times, but they still manage to keep on fighting. It’s deliberately over-the-top, especially the acting, so it’s not worth talking about individual performances.

This film takes place entirely in one location. The viewer is stuck there with the characters. Ben Wheatley, one of the most interesting British directors in recent years, declares his own form of action and storytelling. There’s no real plot or substance, nothing to be taken seriously here. This a movie that has semi-parodic dialogue, featuring one-liners like “Now it’s Cookin’!” and “Let’s buy some guns, eh?” Free Fire has a ballsy irony and sarcasm. 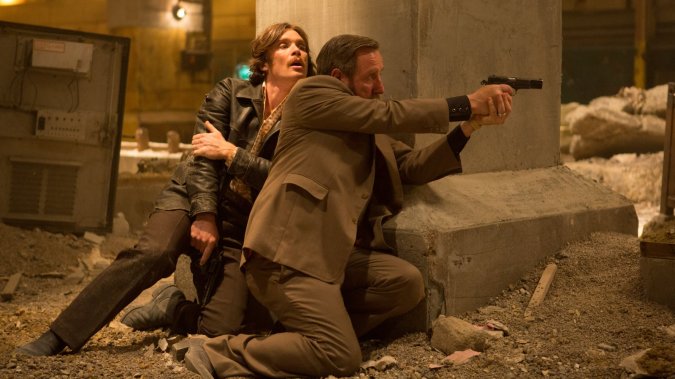 From ’70s facial hair, striking costumes and the glamorous American, Justine (Brie Larson), this movie offers a sarcastic smirk to the audience. While it’s not as good as Wheatley’s previous films, he has done a good job with such a paper-thin premise. Still, it lags at points, as the shootout is so constant, that it starts to dry up. Thankfully, the pace is always switched up to keep us on our toes, and Wheatley continuously throws in new action-packed surprises.

The second half isn’t as strong as the first. While the shootout is broken up by small moments where everyone slumps down and has a quick think about an exit strategy, the whizzing bullets gradually drown out a sense of purpose. At times, I did wonder why I should care about these people, but the film is purely concerned with getting the characters to their destination, rather than any emotional stakes. We are eager to see who lives and who dies. Near the end, everybody is practically gasping for their last breaths.

Free Fire sprays bullets left-right and centre, but it doesn’t always hit the target. It’s cartoonish, random, a little unnecessary, but at the end of the day, it is entertaining. There is lots of swearing, funny comments and down-and-dirty action. This is a 3 out of 5 movie – just about. Guilty pleasure I guess. It’s just watching and wondering who’s going to get shot next. “B” movie fun that you grudgingly love.

Let me know your thoughts on Free Fire in the comment section!