Luke Glanton (Ryan Gosling) makes bank robbery look like a walk in the park in The Place Beyond The Pines.

Motorcycle stuntman by trade, violent criminal by nature, Gosling’s Luke is a classic anti-hero: you root for him, but you know you shouldn’t. This tattooed, chain-smoking biker discovers he’s the father of two-year-old Jason, son of Romina (Eva Mendes), an old flame from the past. Eager to support his child, he decides to rob local banks to make money as quickly as possible, and he uses his bike as a getaway vehicle. Becoming a bank robber isn’t normally a decision you make on the whim, but I guess, in the context of this movie, desperate times call for desperate measures.

I must say, The Place Beyond The Pines is a great way to kill two hours. It’s deeply absorbing, entertaining and rich with emotion. I loved the way the film immediately pulls you into the characters’ lives and makes you want to know more. There are many long takes following the characters, which I thought was a really effective way of creating alignment. Gosling commands the screen and aspects of his character bring to mind his lead role in Drive. These two portrayals aren’t too far removed from one another.

Luke’s story is only one piece of the narrative. There is much more to this film than bank heists and Gosling being badass. The film tells three interconnected stories that unfold over a fifteen year period, involving moral complexities and corruption. The early scenes, focused on Luke, are slowly paced, but their languid style is strangely appealing. I liked how The Place Beyond The Pines is totally character-driven, with everyday conversations, slowly feeding the viewer with information. And when you least expect it, the film thrusts forward in momentum and veers off in all kinds of cool directions.

Luke’s life of crime leads into the next two segments, which involves a rookie cop (Bradley Cooper) and a lonely high school kid (Dane DeHaan), who has too much angst for his own good. The film gets very plot-heavy in the latter stages, which is good and bad, I suppose. It’s good, mainly because there are a lot more action and shoot-outs. But at the same time, it’s bad, because the characters get thinner, as the plot is beefed up. Also, loads of other characters are introduced, each with their own subplots, some more interesting than others.

I can put aside any disappointments though because The Place Beyond The Beyond The Pines is really great. If it wasn’t for the excellent cast, I think it would have been a very different film, vastly inferior perhaps. I enjoyed every performance, even though Bradley Cooper plays Bradley Cooper, like in almost every other film I’ve seen him in. But I like the guy, so it’s fine.

The director Derek Cianfrance, has clearly taken some risks with this film. His decision to rely on interwoven narratives is ambitious and an unconventional way to tell a story. I know it’s not like this form of storytelling hasn’t been done before, but it feels fresh for the genre. If the film wasn’t structured in this way, it may have turned out to be quite generic. In the end, each of the main characters’ stories come to a noteworthy conclusion. 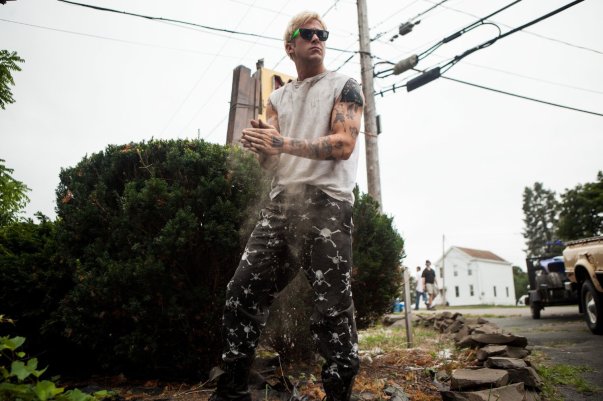 The Place Beyond The Pines is a bold piece of cinema, an engrossing tale that takes you on a thrilling collision course. Contrivances may annoy some viewers, but I personally think the film is much more satisfying when you don’t start nit-picking at plot strands. It’s just not one of those films that are worth over-analyzing. Ultimately, with its intertwined stories, this is three movies for the price of one. What more can you want? I give it a solid 4/5.

By the way, this is a really good trailer, it barely spoils anything:

Whether you’ve seen The Place Beyond The Pines or not, let me know your thoughts on this review in the comment section!