The most interesting thing about Larry Clarke’s Kids is that it’s not a super amazing film, but it gets in your head and stays there.

It was the summer of 1995 when this cult movie came out. John Major was Prime Minister of the UK, Bill Clinton was president, OJ Simpson was on trial and my favourite football team Arsenal had just signed club legend, Dennis Bergkamp. Amongst everything that was going on that year, Kids burst onto the scene and became notorious for breaking boundaries with its portrayal of America’s youth. Two decades later, this is still a film for today. So, it’s time for a review. 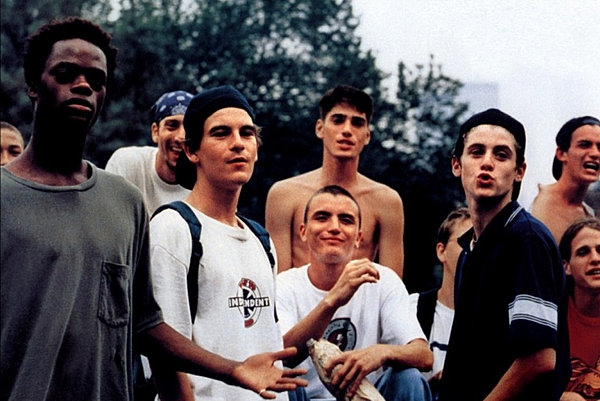 Watching Kids is an experience to say the least, definitely not an experience anyone would want to endure on their Saturday night though. It’s a tough and brutal look at a group of reckless teenagers in New York. Leo Fitzpatrick plays sex-obsessed Tully, who hangs out with his best friend Casper (Pierce). Both are a pair of layabouts that spend their time smoking drugs and getting drunk. We follow them in a single day, one that’s marked by endless amoral behaviour.

There isn’t a whole lot to the story, other than chronicling the lives of Tully and Casper. Turns out, Tully has made it his goal to have sex with as many girls as possible so he can brag to his friends about his latest hookup. Clearly, he’s not a very nice guy, but almost every character in this film is messed up in some way.

I shouldn’t even call them characters because they seem so real. The film wants viewers to ask themselves if they know anyone like the kids in this movie. Only truly thoughtful audiences will appreciate Kids for what it is, as it has such a harsh subject matter.

The main conflict comes in a parallel story when we find out that Jenny (Chloe Sevigny), one of Tully’s previous one-night stands, has contracted HIV. She knows she could have only caught it off Tully, so the whole time he’s been carrying around this horrible disease. Jenny, shocked and disturbed, desperately tries to track down Tully, before he passes on the virus to someone else.

The end result is astonishingly depressing. There’s never a suggestion that there is any hope for these kids. Where are their parents? What’s the reason behind their shocking behaviour? You’ll be asking these questions, as you’re pulled into this unfolding nightmare.

These kids are reckless, stupid and they simply don’t care. They roam the streets, generally doing what they like and looking for trouble. It’s impossible to sympathise with anyone other than Jenny and a couple of the other girls. But right from the beginning, all the kids are lost to the audience. There’s no downward spiral or a major catalyst. This film is bleak from the start.

Kids isn’t a controversial film for controversy’s sake. Its content is dark, but it has a purpose. Larke Clarke wasn’t trying to make parents lock their kids up in their rooms for the next thirty years, but to make sure that people don’t live their lives in ignorance. It has truth and heart, and the acting is outstandingly good. It’s so good that this film comes across like a semi-documentary. Purely and simply, Kids is a story that needed to be told.

Hard-hitting, fearless and upsetting, Kids is tough to like if I’m being completely honest, but it is a great cult film. I was very drawn in as I watched it. Kids is one of the best films you’ll never want to see again.

Have you seen Kids? Let me know your thoughts in the comment section!