Get this – Matthew McConaughey went from lousy rom-coms, like Ghost of Girlfriends Past, to starring in some of the best films of recent times, like Interstellar. He’s become an actor with so many shades, it’s hard to keep track. Dallas Buyers Club was key to McConaughey’s transition away from comedic roles, with many dubbing his change “The McConaissance”.

I bet he’s so glad he took a different route because I’m sure his career would have dried up very quickly otherwise. Anyway, back to Dallas Buyers Club, a 1980s-set film based on a true story. Here McConaughey plays Ron Woodruff, an oil company electrician, who likes drinking, drugs and cheap sex a little too much. He’s a low-life, pure trailer-trash that doesn’t give a rat’s arse about anything or anyone.

Things change when he finds out he’s HIV positive and has 30 days to live. His immediate reaction is: “Let me give y’all a little news flash. There ain’t nothin’ out there that can fuckin’ kill Ron Woodroof in 30 days.” Turns out, he was actually right. He makes it past day 30 while creating the club of the title, an organisation in which he flogs unapproved drug treatments to HIV/AIDS sufferers. It’s not as a shady as it sounds because those who join the club don’t buy the drugs outright, but instead pay a monthly membership.

Woodroof rejects despair and refuses to let the disease beat him and others. We soon realise there is something more to this guy. Okay, he’s never completely reformed, but in his mind, he’s trying to do a good thing. He’s a different type of hero with his own moral compass.

McConaughey brings so much fury, charisma and whip-smart grit to the character, matched by his physical transformation. He’s joined by Jared Leto, who plays Rayon, a trans woman who helps Woodruff set up the club. Together, these two are an acting master class and their drama steers in all kinds of directions, many which are heartfelt. 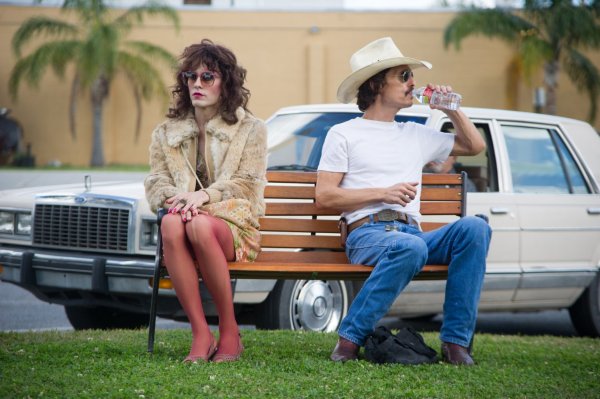 So, McConaughey and Leto are the obvious standouts. I thought most of the other characters, like Jenifer Garner’s Dr Eve Sacks, were fairly by-the-books, nothing of note and just there to help move the story forward. But, it’s a story packed with no easy sentiment. It’s bold, dicey and fearlessly told. Also, I think credit has to be given to the producers who took a chance to explore marginal characters.

Dallas Buyers Club is far from perfect but it’s consistently engaging. There will be a few viewers who’ll have a problem with the film’s pacing, because it’s not the quickest, particularly at the beginning. But if you haven’t already, make sure you join the club and see this film.

Please leave a comment and if you liked this review, you can read more HERE