The subject of bullying is a sensitive area and it’s always an ongoing problem, among people of all ages. Mean Creak, written and directed by Jacob Aaron Estes, does not hold back with its depiction of bullying.

The film focuses on a group of teenagers and one of them, the young Sam Merrick (Rory Culkin), is involved in an incident with George (Josh Peck), a fellow pupil at his school. When Sam’s older brother Rocky (Trevor Morgan), finds out about the bullying, he rounds up his older friends, Marty (Scott Mechlowicz) and Clyde (Ryan Kelley), and they devise a plan to get back at George.

However, the plan backfires and the line between bully and victim is horribly blurred. The film paints a very realistic image of young adults, as they navigate their way through peer pressure and social upheavals. Mean Creak is an examination of moral choices. The film projects the message that young people must face the consequences for their actions.

Mean Creek is an extremely dynamic and emotionally complex film. Within the construction of his young characters, Estes refuses to present morality and the line between what is right and wrong, as fixed notions. All the central characters are portrayed by incredibly talented young actors. The film has a certain tone and vibe that is similar to that of Rob Reiner’s classic coming-of-age tale, Stand By Me (1987). The characters in Mean Creak are very realistically constructed and ever so detailed. You really believe in these kids and their journey. Estes has accomplished a difficult task of projecting both the juvenile innocence and rebelliousness of children. The director taps into the pressures of growing up wonderfully.

At its core, Mean Creak is as much about the victims of bullying as it is about the bullies themselves. As the boys along with Sam’s friend, Millie (Carly Schroeder), proceed with their plan for revenge, they soon realise George is actually just a lonely boy desperate for friends. It’s implied that his aggressive behaviour is related to something much more complex, and his loneliness only emphasises this further. It seems the only relationship he has is with his video camera, which he uses to record his everyday life. His various recordings act as diary entries.

It becomes difficult to decide who truly deserves more sympathy, as all the characters get their moment in the sympathetic spotlight. This also goes for the troubled Marty, who appears to have had a difficult upbringing. The tough persona he projects is merely a mask for some unresolved emotional issues. Also, as the kids start feeling sorry for George and genuinely beginning to like him during their boat trip, ambiguity emerges surrounding the justification for revenge and the true victim of the story. 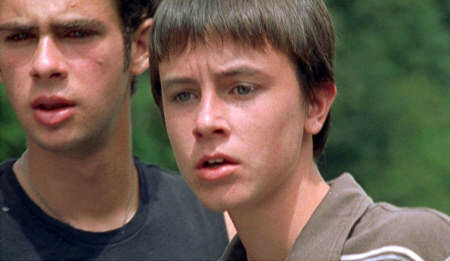 Mean Creak is a great film with some very impressive performances. Josh Peck’s portrayal of George, is all the more powerful and interesting. Considering he is known mostly for his comical roles such as his part in Nickelodeon’s kids TV series, Drake & Josh, his performance is very impressive. This movie is a masterful piece of work and even now years after its release, it is still highly relevant.

Quoted: “My name is George … and this… is the inside of my mind.”

Directed and written by: Jacob Estes