Can you imagine what it would be like to live a life within four walls? This precise question is explored in the heart-breaking Room, written by Emma Donoghu, based on her novel of the same name. The film tells the story of Joy Newsome (Brie Larson), and her five-year-old son, Jack (Jacob Tremblay), who have been held captive for several years in a confined space.

There is something about claustrophobia in films that makes for such an absorbing and engaging viewing experience. Buried (2010) and 127 Hours (2010), are among a catalogue of films dealing with enclosed spaces. I’m always interested in these type of films, so that’s why Room instantly caught my attention.

In this film, Joy and her son are being held captive by a man simply known as Old Nick (Sean Bridgers), inside a small shed they call Room. In their confinement, they share a bed, a toilet, television, a make-shift kitchen and the only window is a skylight. Joy was abducted seven years prior by the repulsive Old Nick, so she has fashioned Jack with an elaborate story that reality only goes as far as the four walls of Room, and the rest of the world outside it, only exists on television. 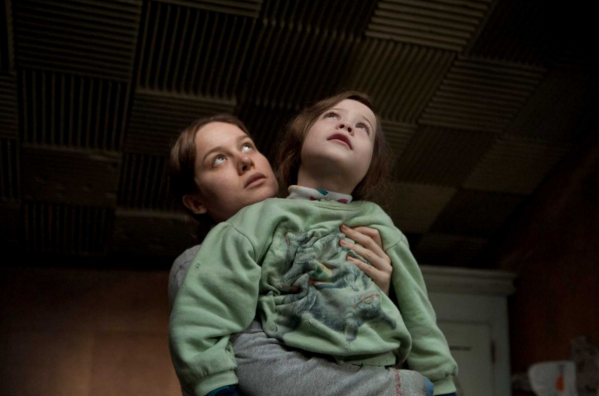 Room is the only life Jack has ever known, unaware of the truth, he is seemingly content with this microscopic portion of the world, which he believes is all there is. The film is from the perspective of Jack and the camera often focuses on small details of the room, to articulate the richness of the world that he perceives.

The cinematography is simply sublime. The film really draws the viewer into this horrible experience, but at the same time, compromised with Jack’s naive optimism. Upon his fifth birthday, Joy can no longer tolerate their nightmarish situation, and her desperation to escape reaches breaking point, so she devises a plan to finally break free.

I was initially unfamiliar with Brie Larson, as I hadn’t seen any of her previous work, so I wasn’t expecting anything special from her, but she provides an astounding performance. She excellently portrays a woman enduring absolute agony, whilst trying to care for her son, and maintain the lie she has told him. Also, for such a young actor, Jacob Tremblay is brilliant as Jack, perfectly capturing childish innocence.

I’m sure Tremblay won’t be short of offers for other roles. Also, the mother-son relationship is as authentic as it gets, and it’s impossible not to care for their struggles. Strangely, I actually felt like I was apart of their journey. Room is one of those movies where you really do forget you’re watching a film.

Also, Room is the type of film that has the rare ability to effect us physically. Well, it did for me anyway. There is one scene in particular that I found incredibly straining, as the tension is just unbearable. This film provokes genuine emotion and I really found myself immersed into these characters’ upheavals. I would say it’s best to watch Room with restrained expectations, as it is quite a subdued and intimate viewing experience, which some of you may find challenging.

There is little going on inside the room, but the film forces the viewer to consider the reality of being held prisoner in an enclosed space. Ultimately, the film does require some patience. If you have an extremely short attention span, you’ll probably get quite bored, if I’m being honest. Room will primarily appeal to viewers who enjoy character studies, emotional drama and strong narratives.

Room is an imaginative exploration of real-life occurrences involving abduction and captivity, as it was loosely based on the Josef Fritzl case. Although film has interrogated these kinds of issues many times, Room‘s originality comes from situating the film from a five-year-old’s perspective. Despite so many positives, Room certainly has its flaws. The second half of the film, although still engaging, is not quite as impacting as the film’s earlier moments. I found the ending to be slightly underwhelming also, but it is appropriate for the overall tone of the film.

Room is excellent and thoroughly deserves all its critical acclaim. I believe everyone should watch Room. It’s such a captivating film and easily one of the best films of 2015.

This trailer is spoiler-heavy, so I’d recommend not watching it, so it doesn’t ruin any of the surprises.

This was one of my earliest reviews back when I first started this blog, so I thought I’d re-publish it to give some air time! Let me know your thoughts in the comment section.