This festive-themed road movie, Hector has the spirit of Ken Loach hanging over it. It’s a social realist drama with Peter Mullan at the centre. He plays the titular Hector, a homeless man from Glasgow, seeking to reconnect with his family. I stumbled across this low budget British film on Netflix and I thoroughly enjoyed the warmth and honesty of its story.

If you’re expecting to see a depressing story about life on the streets – think again. It’s surprisingly uplifting, a film that humanises vagrants in the most naturalist way possible. From service stations and homeless shelters, Hector travels the country and he encounters both kindness and aggression in all there forms. 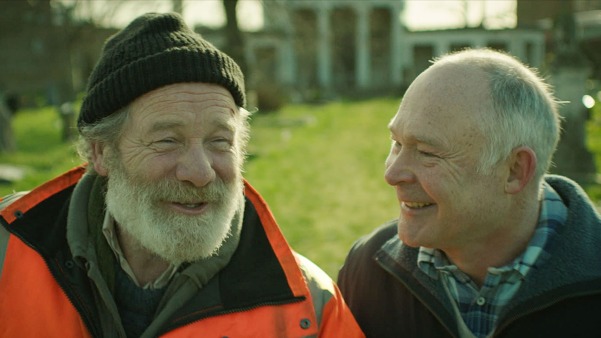 But where did Hector come from? Why the estrangement? How did he end up on the streets? Hector’s past is gradually revealed, but it remains a mystery in the early stages of the film, leaving the audience to speculate. Not many clues are given to the viewer so Hector’s urban plight could be a result of any number of reasons. The secret is a little drawn out, but it feels necessary for the development of the story and Hector himself.

Gavin accomplishes the tricky task of portraying the harsh realities of homelessness while maintaining a sense of humour. The result is a quiet story that is as much about Hector’s marginal existence, as it is a celebration of friendship, community and family. I liked how the film doesn’t try to be painstakingly sad for the sake of it. Instead, it focuses on the day-to-day struggles of Hector in a way that’s “normalised”. It deviates completely from the stereotypes of homeless people.

For such a small budget, the film is very well shot. The directing team clearly made the most out of the authentic locations. We see Glasgow and London in all their sin and glory, both the good sides and the bad. In the end, Gavin’s agenda is simple: to show that people like Hector have a story, that they have a life and the voices of those living on society’s fringes, deserve to be heard. This the fundamental message in Hector.

BOTTOM LINE – This is overall a solid film, that radiates community, holiday spirit and realism. Well worth a watch.

Directed and written by: Jake Gavin