Hounds of Love is a brutal and brilliant film from Australia. Based on a true story, it’s a study of horror hiding in plain sight and there could hardly be a more disturbing film around. Viewing this, you’ll probably put your face in your hands, grimace and squirm in your seat. But why subject yourself to something like this? Why watch something so horrible and unforgiving?

Well, I’ll tell you. Hounds of Love is actually quite thought-provoking. It takes a deep look at domestic violence, abduction and controlling relationships, the specifics of which are strengthened by incredible acting. If you make it to the finish line, you’ll be rewarded, as things don’t end the way you expect.

It’s a must-watch for horror fans and this is coming from someone who’s seen dozens of horror movies. From The Evil Dead, The Texas Chainsaw Massacre, to Carrie and The Babadook, it’s a vast genre and I’m always ready for the next scare-fest. Hounds of Love is on par with some of the darkest films out there. Given how blood-chilling it is, it’s surprising how much of the events happen off-screen. 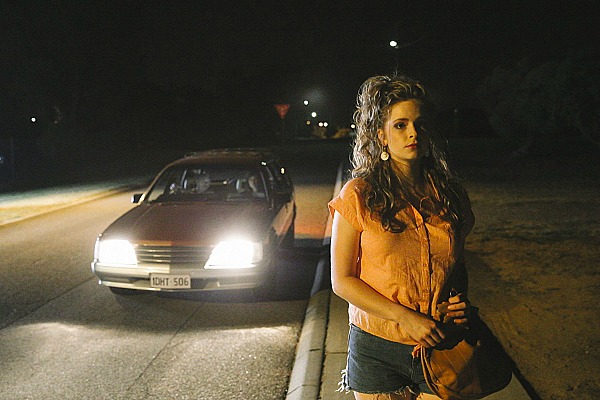 The terror takes place in Perth, with the plot focusing on a serial killer couple, Evelyn (Emma Booth) and John (Stephen Curry). This crazed couple has taken to driving around their neighbourhood to find school girls to abduct. Hounds of Love crafts the tension behind closed doors, digging deep into the psychological depths of true crime, and it stays with you like a nightmare.

From the second the film starts, it lets you know that you’re not in for an easy ride. It opens with hyper slo-mo shots of teenagers playing netball, volleyball and other games. The way the camera focuses on the kids suggests someone has something dark in mind. Ben Younger’s filming is hauntingly effective, as it gets you hooked on the movie straight away.

Although we’re introduced to other characters, Vicki (Ashleigh Cummings) is the main focus. We follow her on every step of her ordeal, starting from the moment she gets lured back to John and Evelyn’s home. She walks straight into trouble and I cannot believe this happened in real-life. What happened to never talk to strangers?

Of course, we still feel agonising sympathy for Vicki’s nightmarish situation, of which she tries her best to get escape. You never see the abuse she faces, but it feels like you saw it all happen right in front of you. As we hear her cries and please in the background, we’re forced to imagine the horror.

Considering how pleasing the cinematography is, the film’s unwatchability is ironic. It’s a double-edged sword that makes the film unique. Even when you flinch, recoil and feel disgusted, you’re pulled in closer. This might not have been the case if the story and acting weren’t as plausible. Stephen Curry, who is an absolute monster, is as convincing as it gets. He’s deranged and psychotic, while Booth’s Evelyn is in a grey area. She’s damaged, unsure of her mental state, but shows humanity in the face of John’s horrific behaviour. This adds a layer of depth not found in most horror-thrillers.

This is a great film about horrific stuff. It will be too ‘real’ for some people’s tastes, but for horror fans, it’s unmissable. After you’ve watched it, you’ll be mulling over what you’ve seen for days. Hounds of Love is a challenge, but the horrors are more profound than the plot suggests.

Written and directed by: Ben Young

What do you think of Hounds of Love? If you haven’t seen it, reckon you could stomach it? Let me know in the comment section!