Obviously, the subject matter of sexual abuse is always difficult to delve into. Is it worth portraying or should it be left alone?

Una walks on a tightrope around the topic, with Rooney Mara and Ben Mendelsohn playing the leads. In my opinion, these are two great actors currently flying under people’s radars. As expected, they’re at the top of their game in this two-handed drama.

Mara is Una, a young woman, who had a sexual relationship with her middle-aged neighbour Ray (Mendelsohn) when she was 13. Now, an adult, she tracks him down at his workplace after she spots his photo in the paper. Does she want revenge? Closure? To learn the truth about the man she thought she could trust? It might be all these things, but there’s always a feeling of painful unfairness that she, the victim, hasn’t recovered whereas Ray has served a prison sentence and moved on with his life. 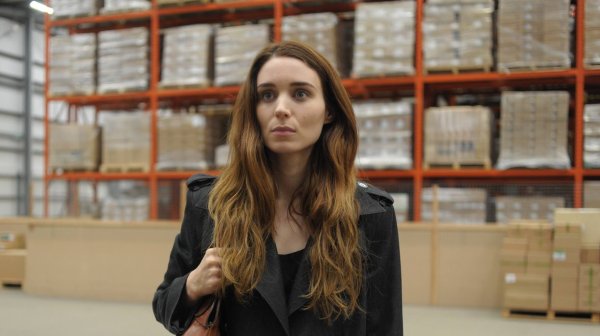 What is most striking about Una is how it pulls apart the stereotype of victim and abuser. You’ll see it in the way Una and Ray are presented, how they talk to each other and how their meeting is a strange mix of confrontation and reunion. Most of the plot centres around their conversation, which ranges from hysterical, angry to timid. Neither character is likeable and there’s no reason why they should be. That’s what makes the film morally unsettling and sometimes hard to watch.

We expect Una to be a ‘nice’ person, but she is quite manipulative and impulsive. She’s damaged and has been made that way. You never feel her emptiness because of how difficult it is to get into the mindset of a sexual abuse victim – that’s the tragic part about it. Ray, as sick as he is, is well outside the paedophile stereotype. He’s not a creepy loner, but rather a man with an ordinary life and the film is always careful not to give him sympathy. Flashbacks serve as a reminder of the predator he is.

This is a tough story and there are moments, unfortunately, that feel voyeuristic, which I think is down to some of the camera decisions. It’s as if the director tries to parallel the storytelling of the stage play it’s based on. The effect is the viewer is more of an observer of the story. If that’s the director’s intention, then he’s bang on the money, but I’ve always held the opinion that the best, most powerful movies involve the audience with the plot.

Una is worth watching for the faultless performances by Mara and Mendelsohn. You don’t “see” their acting because they become their characters. The taboo issues make it very disturbing, but it is gripping. I challenge you to give it a go.

Writer: David Harrower (based on his play “Blackbird”)