There’s nothing like a British “grit-film” to give you a slice of life, in the bleakest way possible. Tyrannosaur, like most British films, doesn’t hold back on its depiction of violence and abuse. For want of a better phrase, this is an up-close-and-personal kind of movie.

It focuses on Joseph (Peter Mullan), a middle-aged widower, whose life appears to have sunk to its lowest point. He’s an angry, lonely man. He spends his time in local pubs where he’s quick to start fights. When he’s not in trouble, he’ll be staggering around his grimy Northern estate. It’s clear he has severe anger management issues and you get a sense he’s had this aggression his whole life. 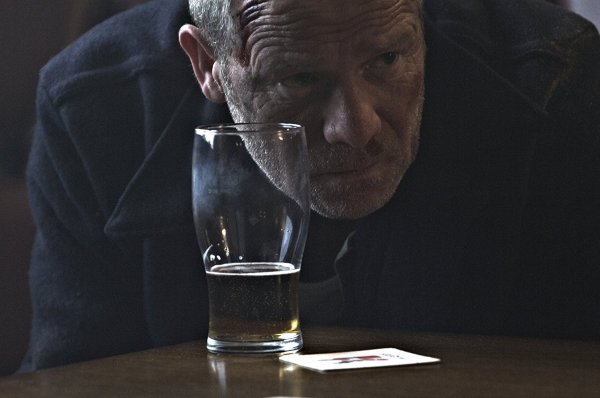 As you probably guessed, Joseph is a dark character whose behaviour is borderline out of control. I won’t say what happens, but when the film starts, we’re shown straight away the kind of man he is. Later, he stumbles into a charity shop run by Hannah (Olivia Coleman), a proud Christian. Joseph has met his polar opposite: Hannah is timid, soft-spoken and she offers to pray for him, even though he’s a complete stranger. Joseph dismisses her kindness but over time, he begins to see her as a friend.

Hannah appears to have a normal, happy life. But her carefree attitude is a facade for a nightmare existence. She’s being abused by her husband James (Eddie Marsan), one of the most violent, sadistic characters I’ve ever seen in a film. He’s a total monster and the suffering Hannah goes through is unwatchable at points. Domestic abuse is the realist kind of horror, which is why it’s so hard to stomach.

I appreciate that Tyrannosaur is rooted in real-world truth, but an uplifting message would have been nice. There is no message, only people stuck in a cycle of violence. So, viewing it as I did, in high spirits, is not recommended. It’s a rather negative film, but I can’t fault the effort and respect in which it has been made. Writer-director Paddy Considine has crafted a film with complete dedication, and the commitment from the actors is applause-worthy.

Peter Mullan and Olivia Coleman are a double force, both as equally as impressive. They make their characters believable and sympathetic. Eddie Marsan, as well, is convincing as a twisted, depraved abuser. You get a feeling these actors have dug deep into real-world personalities to bring their characters to life.

As tough and down right gutting it is to watch, Tyrannosaur is excellent. It pushes the boundaries to deliver a story of real fear, sadness and anger. A great deal of heart has been poured into this film and the result is an intense, challenging piece.

Directed and written by: Paddy Considine