Can you blame a man for a crime he committed as a child?

This is one of the questions melodrama, Boy A – adapted from Johnathan Tigwell’s novel – explores in abundance. The film tells the story of a rehabilitated juvenile killer (Garfield), the newspapers once called “Boy A”. After spending fourteen years in prison, he attempts to reintegrate into society and escape the shadow of his dark past. Released at 24, he takes the new name of Jack Burridge, is given a job and a place to live, ready to make a fresh start and eager to put the past behind him. 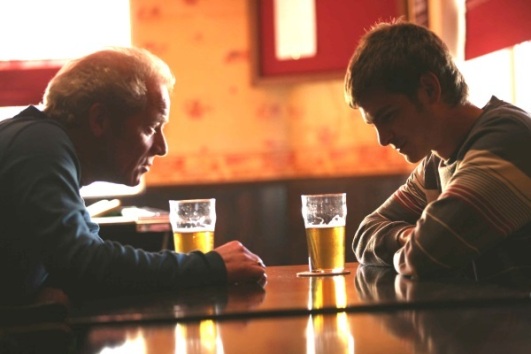 Boy A was originally broadcast on Channel 4 in the UK, but I didn’t watch it until several years later when I became familiar with Andrew Garfield. Ever since The Social Network, I’m always on the look-out for any films starring Garfield, as I think he’s a brilliant actor.

The story is possibly inspired by the murder of James Bulger, a horrific crime I’m not going to spend time explaining because it’s extremely depressing. In Boy A, the details of Jack’s crime are revealed gradually through various flashbacks, which also gives us an insight into his childhood. Real-name Eric, the flashbacks portray him as a shy and lonely boy, with neglectful parents. He develops a friendship with schoolmate, Phillip (Taylor Doherty), a troubled boy with a violent temper.

In the present-day, care worker Terry (Mullan), looks out for Jack and gives him emotional support. Jack must never reveal his true identity or discuss his time in prison, as the results would be catastrophic. He’s essentially told to abolish his old identity as if it never existed.

Garfield delivers an excellent performance as Jack; he makes him so vulnerable and naive to the world. Having been locked away for so long, he hasn’t had any practice going out with friends and socialising like a regular adult. He stumbles over his words and struggles to express himself, but he develops a relationship with Michelle (Lyons), the secretary at his new job. With Michelle, Jack becomes happier than he’s ever been, but as he falls deeper in love, he longs to tell Michelle the truth about his past. Part of him he knows he cannot hide his secrets forever.

Boy A is very realistic and the whole film is an exercise in naturalism. Boy A ultimately asks us to think about forgiveness, human nature, morality and justice. There’s a lot of thought-provoking themes at play and the film is at its best when it focuses on Garfield, rather than his child counterpart.

Although Boy A decides for itself that Jack is a good guy worthy of redemption, it’s an excellent film. Not only do I highly recommend this film, but I also suggest reading the book also, because it’s on par with the movie, if not better. Boy A is certainly small in scale, but its impact is enormous. It’s a film that leaves you with lots to think about. It’s harrowing and very sad, but it’s a great exploration of society and the individual.

(No trailer here because it spoils far too much!)

Have you seen Boy A? Let me know your thoughts in the comment section!