The main character is Milo (Eric Ruffin), a black teenager who is about as emotionally damaged as he could be. He spends his days walking the streets alone, watching violent videos and trying to avoid local gangs. Milo doesn’t encounter any bloodsuckers in his daily routine, but he is obsessed with them – and he acts out his fantasies with brutal assaults. 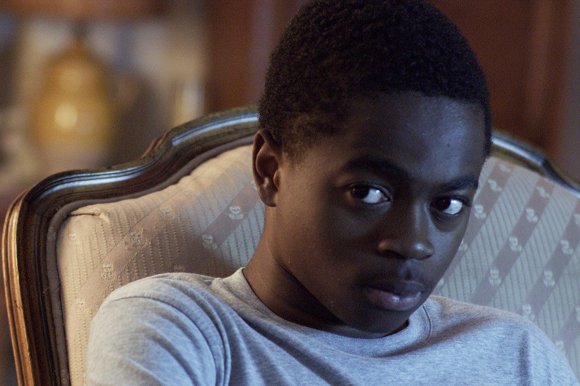 Like the vampires in classic horror films, Milo has a marginal existence. He’s an outcast and a self-proclaimed vampire. Day and night, he looks for potential victims and writes a journal for “rules for hunting”. Milo’s activities are essentially a vampire role-play. It’s his dark escape from trauma and neglect. Backstory? Forget about it… The Transfiguration is a character study set in the here and now. While there are hints about what happened to Milo to make him this way, there is little information about his past. This makes for a far more ‘realistic’ film.

I loved how The Transfiguration is completely grounded in reality. Milo lives in a crime-ridden, low-income neighbourhood where gang violence is everywhere. The scariest monsters Milo encounters are not the undead, but rather environmental and social horrors. Of course, you could argue Milo is the monster of the story, but he’s a victim of extensive trauma, and he has grown up in an environment where bloodshed is pretty much on his doorstep. When Milo meets Sophie (Chloe Levine) and tells her about his obsessions, he starts to question his actions. Sophie has her own problems and she becomes the one shining light in Milo’s life.

Every scene is built steadily and the tone is never anything less than chilling. If you can stick with the measured pace of the film, you’ll appreciate the great lead performances by its young stars. Slow-burn movies like The Transfiguration are great to watch every now and again. These films develop their characters and worlds with much more scrutiny. For that reason, you need to be in the right mood for The Transfiguration.

O’Shea’s film is a defining spin on vampire lore that at the same time is a love letter to the genre. Pitch dark, offering no cheap answers to its difficult questions, The Transfiguration is a gripping horror movie with a shattering finale.

Directed and written by: Michael O’Shea