From almighty super-villain to a sadistic plantation owner, Michael Fassbender has incredible range and is one of the best actors today. He has starred in all kinds of films of various genres. The main reason I really like is that he always undertakes challenging roles, and appears unconcerned about the likeability of the characters he portrays.

I have decided to list, in no particular order, what I believe are some of the best films in his career so far.

In Shame, Fassbender plays Brandon Sullivan, a man struggling with a secret sex addiction, which has consumed his life. When his sister, Sissy (Carey Mulligan) suddenly re-enters his life, he becomes forced to finally confront his addiction. Fassbender gives an emotional and compelling performance, that sees him transform into a cold, alienated, and tragic character.

It’s an interesting exploration into the quarrels of addiction and its consequences. Shame does focus more on Brandon as a character, rather than the issue of sex addiction itself, but the film manages to hit the right balance. Fassbender excellently portrays a man haunted by his compulsion, but at the same time, content with his persistent need for gratification. The film is very dark but artistically constructed, and Fassbender succeeds in such a difficult and uncomfortable role.

Fassbender plays Lieutenant Archie Hinox in Tarantino’s re-writing of history, which tells the story of a group of Jewish soldiers, who plan to assassinate the leaders of the Third Reich. Although Fassbender is not actually in a large portion of the film, he still produces some great moments, stealing the spotlight in every scene he is in. Also, he is at the helm of some very memorable quotes.

Based on true events, Fassbender portrays Bobby Sands, an IRA volunteer, who led the hunger strike and the ‘no wash’ protests. Hunger depicts how the Irish Republican prisoners fought back against the revoking of their political status by the British Government in 1976. Fassbender produces an astonishing and unflinching performance, in which we see his body literally deteriorating on-screen. A really strong portrayal of the real-life Bobby Sands. Fassbender actually lost two stone for the role, in order to capture the realism of the hunger strike.

Once again, Fassbender collaborates with director, Steve McQueen, and together they produce the fantastic, but incredibly harrowing, 12 Years a Slave. An adaptation of the slave memoir of the same name, the film tells the story of Solomon Northup (Chiwetel Ejiofer), who is kidnapped and sold into the slave trade.

Fassbender takes on the role of Edwin Epps, an outrageously monstrous plantation owner. Although playing such a nasty character, it is definitely one of his most powerful and challenging performances to date, which takes a particular nuance to execute effectively. Villainous and seemingly devoid of any humanity, Epps is one of the most repulsive and loathsome characters I have seen in recent times. 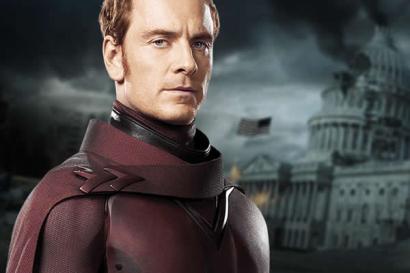 In the seventh X-men instalment, which is set during two time periods, acts as both a sequel to X-Men: The Last Stand (2006), and as a prequel to X-Men: First Class (2011). In the recent X-Men films, Fassbender has made the character of Magneto his own. Even though he plays a younger version of Ian McKellan’s incarnation, he manages to avoid being a complete copy and offers a refreshing take on the metal-bending super-villain.

Fassbender has a knack for playing bad guys. In Days of Future Past, (which is the best film in the X-Men franchise so far), he brilliantly channels the malice and ferocity of the comic-book character, Magneto.