Opposing the found-footage style of its predecessor, 10 Cloverfield Lane is a psychological thriller, which follows Michelle (Mary Elizabeth Windstead), as she wakes up in an underground bunker with two men, after a car accident.

One of the men is her captor, Howard (John Goodman), who claims there has been an unknown attack, which has poisoned the air, so their only hope for survival is to stay underground. Howard insists he is protecting her and the other captive, Emmett (John Gallagher Jr.), from the threats outside. Suspicious and unconvinced, Michelle becomes increasingly desperate to find out what is really going on. 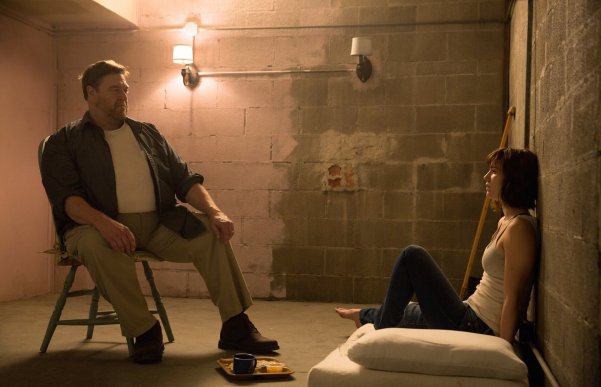 Produced by J.J. Abrams, 10 Cloverfield Lane originally started life as The Cellar. It was only until the latter stages of filming that it was decided the name would be changed, as well as situating the film in what appears to be a planned Cloverfield anthology series.

I was expecting the film to have some connection with 2008’s Cloverfield, anticipating it to be a spin-off of some sort, but the two films could not be further apart. Both narrative-wise and visually, the two films share no resemblance at all. This does not really ignite any problems, as viewers can now comfortably watch 10 Cloverfield Lane, without needing to see the previous film. Unlike the first film’s giant setting across a whole city, 10 Cloverfield Lane is confined to that of claustrophobic environment, where there’s a constant a sense of mystery and uncertainty

As the film proceeds, we are completely aligned with Michelle throughout. We learn and understand things as she does. She knows there is something not quite right about Howard and so do we. Goodman excellently plays such an intimidating and mysterious figure, but at the same time, he manages to project a very small and subtle sense of security, which makes us consider the possibility that he might actually have good intentions. In the early stages of the film, the viewer is left to judge Howard for themselves, and if Michelle is really safe in the bunker.

However, it soon becomes clear that Howard may not have been completely truthful about some of the things he has told her. Both Michelle and Emmett feel increasingly threatened as they discover new details about Howard, soon realising that he may very well be dangerous after all. Fearing for their safety and sensing that there is clearly something sinister going on, the pair plan to escape. As a result, Howard’s role as both captor and protector becomes very blurred.

Despite the film’s tiny cast, 10 Cloverfield Lane still manages to be incredibly engaging and atmospheric. Also, although the film is much more subdued and intimate than Cloverfield, I can assure you that Trachtenberg’s film is full of surprises. In terms of performance, Winstead steals the show. Although Goodman is very good, making a convincing villain, it is Winstead who carries the film and contributes to its overall impact. She brilliantly captures vulnerability and fear, whilst embodying strength and determination to escape her situation. Gallagher’s Emmett, lacks depth and is essentially a “sidekick” character, but he’s very likaeble and provides much of the film’s comic relief.

Although the end result is enticing, the film struggles with its build-up in place. I found Michelle’s journey to be too occupied with unavailing moments, like the scenes of her and Emmett playing board games and making puzzles. Although clearly put in place comical effect, I felt it derailed the emotion of Michelle’s journey. However, she remains a fairly traditional protagonist that is very easy to root for.

The less you know about 10 Cloverfield Lane, the better your viewing experience will be. Its twists are explosive and abrupt. While the film excels in creating mystery and thrills, it contains some action sequences where the plausibility of such feats are questionable. All things considered, 10 Cloverfield Lane is a very good film, that ultimately leaves you guessing right until the very end.

Quoted: “Crazy is building your ark after the flood has already come.”

Let me know what you thought of 10 Cloverfield Lane in the comment section!